Part of the investigation included

understanding the airflow patterns in the Swissair configured MD-11 aircraft

Knowing those patterns could help locate the source of the fire.

Boeing's  experience in these matters revealed that

airflows in the aircraft while at ground level

differed to those while at high altitude.

One reason for this was that

with the aircraft flying at over thirty thousand feet,

the skin of the aircraft cooled down to minus 60 degrees F.

Plus the plane travelled at a speed of 0.8 mach or about 700 miles per hour,

so any heat on the inside surface of the skin

would quickly dissipate and be lost to the huge heat sink that the aircraft skin had become.

To determine these patterns

to record those internal air flow patterns while at altitude.

As mentioned in the book,

there was considerable opposition to having a police investigator on board the flight.

That opposition not only came from Boeing and the TSB

but from RCMP file supervisors. 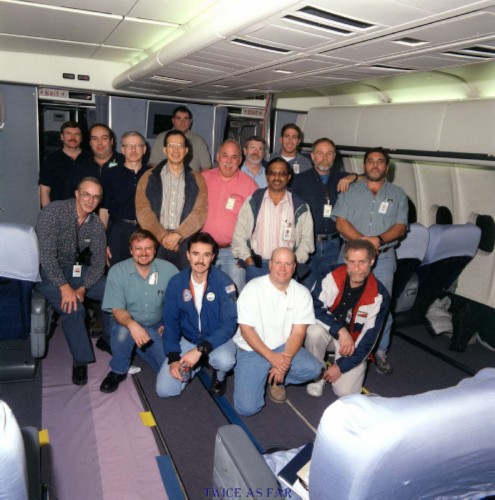 Once the flight was over and back on the ground, there was time for a group photo of those who had worked the test flight, except of course for the second Boeing photographer who took this photo.  Four TSB members are present along with me, and the rest are all Boeing personnel.  John Garstang is at the photo's left rear with Mark Clitsom beside him and then Vic Gerden as the third from the left of those standing.  Larry Fogg is in the blue, white and red jacket and kneeling on the right of the foreground row.  Jim Foot is standing at rear centre, fifth from the right of those standing just behind the salmon coloured shirt.  I am at the extreme rear of the group, left of centre and behind Gerden's left shoulder, a head above everyone else.

The tests were completed first with the smoke curtain sealed

and then with the curtain opened.