After the scheduled burns had been completed,

not only was there no molten aluminium,

however, all of the available fire-load material within the frame had not been consumed.

The temperatures within the frame had not been high enough to ignite all the available material.

The tests that had closely replicated a non-criminal fire source had failed to produce the same effects as seen in the crash debris.

Therefore the TSB required a third and unscheduled burn to maintain their assertions of a non-criminal fire.

Thus the 'fraud' burn test was prepared and undertaken.

During the previous FAA-2 trip,

Dr Lyon of the FAA burn test centre had suggested burning about one kilogram or 2.2 pounds

of the Metalized Mylar material in the frame to see what it would do.

and it would have been the main source of legitimate fuel for the fire that had downed HB-IWF.

However, Dr. Lyon included in this amount the Metalized Mylar that covered the three main ducts.

He did not seem to know that the TSB had improperly wrapped those ducts in the wrong material.

While the burning of this amount of material had already been done in the phase 1 and phase 2 fires,

Dr. Lyon's suggestion was to pile it loosely in the centre of the frame and see what happens when it all burns at once.

The TSB members had hesitated to do this because of the implications if the burn test failed to melt aluminium.

The TSB then decided to undertake the test.

However, there were additional measures added to the test to ensure the melting of aluminium. 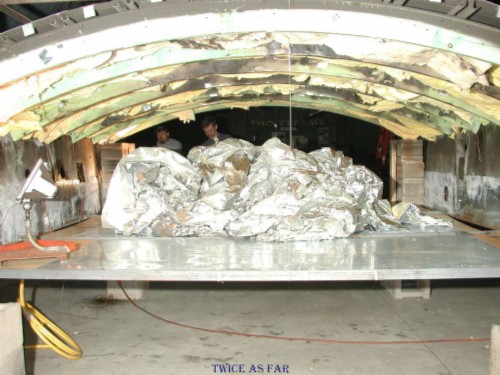 This photo shows the pile of Metalized Mylar bundled loosely on the frame floor that is supposed to represent the ceiling area of the galley of the plane.  Also still in the frame is an unknown weight of fresh intercostal or inter-frame fibreglass insulation. 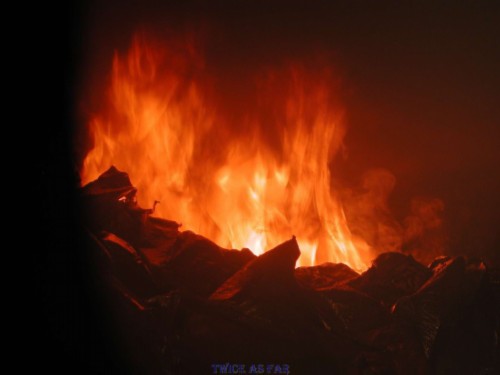 Once the fire was set alight in the normal fashion, it did not take but a few seconds for it to start an inferno within the frame. 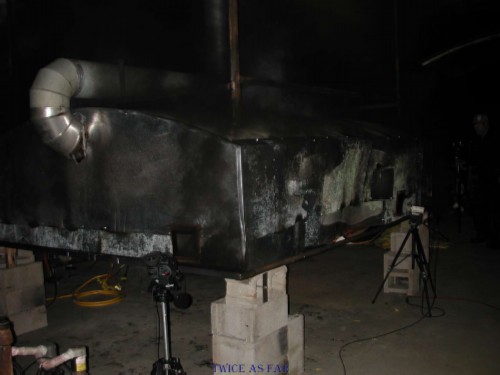 This photo was taken within a minute or so of the fire being set.  The windows are dark because there is so much smoke inside the frame that no light can escape.  At this point, the cameras are being moved back because the fire has become so intense and violent that the cameras were thought to be in jeopardy. 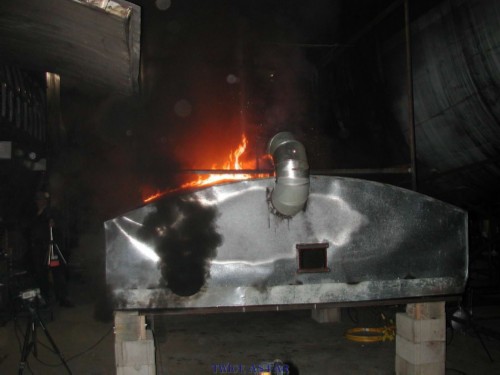 This photo was taken several minutes into the fire and the roof of the frame had caught fire.  The paint on the outside was burning, and it turned out that the frame had cracked due to the heat.  The smoke levels in the hangar had dropped down to less than a dozen feet from the floor.

The TSB went to the expense of hauling the frame all the way back to Ottawa and then freighting it to Halifax.

The TSB had a serious problem of credibility due to the first fire tests.

Those first tests showed that the fire load in the aircraft,

which was represented by the materials placed in the frame for these tests,

was insufficient to melt aluminium.

Indeed, the fire load on the ducts was insufficient to ignite and burn not only all the ceiling material,

it failed to burn all the material on the ducts even with the addition of large, high output heaters.

The final 'fraud' burn was staged to solve the credibility problem.

This test was just that, a fraud!

The fire load in the frame represented

at least six times the amount of material present in the corresponding area of the downed MD-11 aircraft ,

and it burnt in one-quarter of the time.

The burn conditions were such that it had ample amounts of oxygen,

the frame's skin was at least 120 degrees F warmer,

and all the material was dry and crumpled to allow easy and rapid burning with air between the material's layers.

Considering the conversations that I had with both John and Don,

that the Metalized Mylar was capable of creating the damage that we had seen in the debris reconstruction frame.

John and Don, being TSB employees, were at the mercy of the demands of their superiors

As for my role in the tests,

I certainly had no support from my management to interfere with anything that the TSB had planned to do.

that stated that they could test to destruction any part of the debris material.

Indeed, none of this material was debris from the crashed plane

so they were simply burning un-associated materials to see what results came of it.

As for putting the results on display,

again I had no control over that.

Indeed, I was tasked with installing the test frame on the wooden stand in the hangar.

As for believing that Gerden controlled this burn, 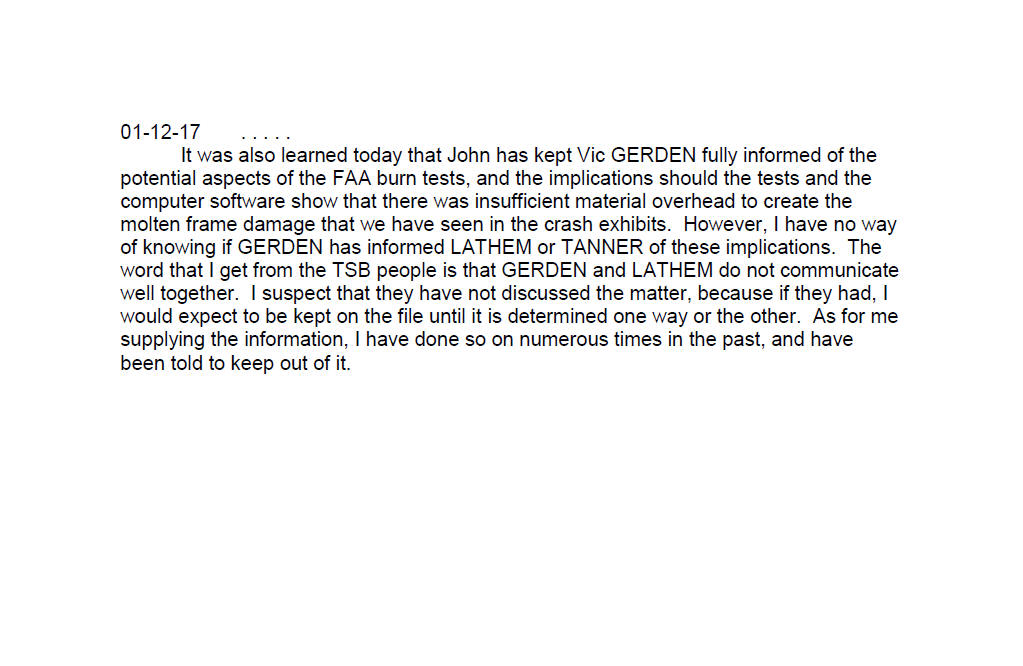 Gerden most certainly had control of the burn tests.

After all, he had to account for the expenses not only of his own investigation

by the people at the FAA burn centre.

he had to request my time from the RCMP.

I doubt that he cared.

He was simply following orders

that had come down from the Commissioner's office in Ottawa.

The following is taken from my file notes of the 'fraud' fire.

At about 1645 hrs, with everything set up (my two cameras and the two FAA cameras),

To say the least, it was spectacular.

With the tapes rolling,

it was started in the normal manner after three electronic flashes,

and Don ENNS set alight the material from underneath.

the frame filled with smoke,

and nothing more could then be seen.

The frame belched thick black smoke from every crack and hole,

the smoke stack billowed smoke like a locomotive burning coal,

and everything snapped and popped from the high heat.

Part way into the fire,

the upper surface of the frame caught fire and was put out with a garden hose and a fine spray.

Because nothing could be seen through any of the viewing ports or openings,

as I didn’t know if the frame would sustain the fire.

The building filled with smoke,

and the viewing port glass on the left side broke from the heat and flexing of the tin frame.

Eventually the centre ceiling panel fell partly to the floor

and it could be seen that most of the material was already burnt.

It would appear that the tin gave way as it cooled back to room temperature and shrunk.

Photos during the actual burning were taken on roll #037.

On completion of the burning,

the frame ends were removed and I took a series  of panoramas on roll #038, position A & B.

In taking the pans,

initially the insulation was still in the ceiling of the frame.

one piece was hanging down in such a manner as to totally block the camera.

So I cut it off at the frame level to allow a complete view of the frame.

Because of the amount of damage to the frame created by the fire,

it was decided to allow the frame to cool down completely

before conducting a further post-fire examination.