Lathem, after the 'Change the Notes' meeting,

supplied a copy of the RCMP manual on note taking.

There are too many pages with not much material for them all to be presented here.

But some important points are presented here

that were brought to the attention of Conlin in the rebuttal memo.

Some of them are described in the book.

Note the sentence - 'As a permanent, ongoing record of events ...'

'Serve as a record of your conduct should questions arise.'

What about the conduct of others involved in the investigation?

Note the line - 'Do not include your personal opinions on any aspect of the case.'

This was another of the many points that were raised with Conlin.

Does it mean that an expert witness,

with an expert opinion,

cannot keep notes of that opinion?

The rebuttal to her memo closed in on the fact that,

I had court accepted expert opinions on many subject matters in many cases.

were just some of those areas.

and who have never been to court,

and only fools and more idiots would adopt it as correct procedure.

Paragraph 2.1 in the following

provides that a properly compiled notebook

That implies that a notebook is improperly compiled

if it provides contradictory evidence 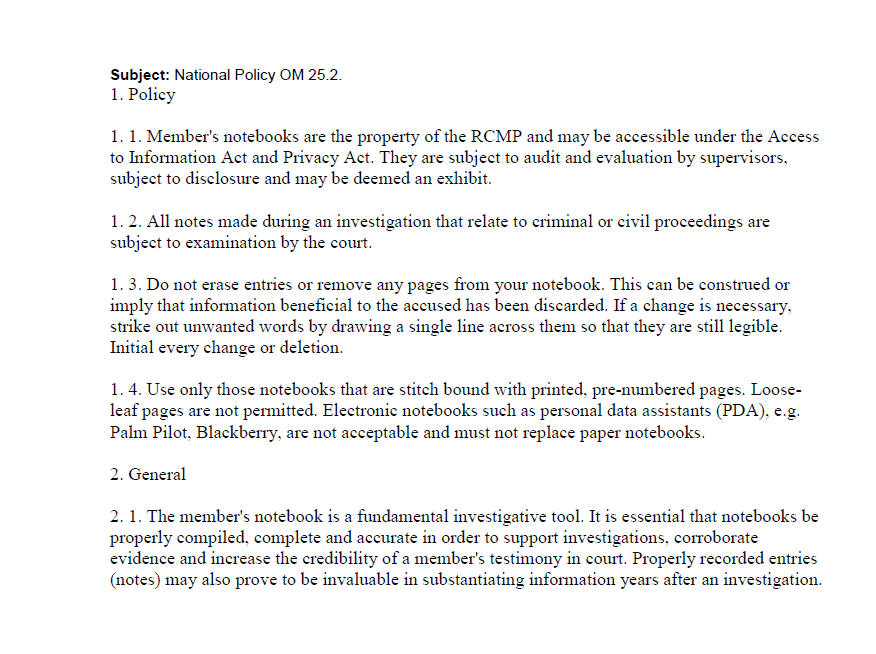 While the general public may at first look at this as dirty laundry of the Force being aired in public,

who were conducting criminal investigations.

The notes that were made during those cases

resulted in people being charged and convicted in court.

and did the right and moral thing,

and demanded that it be followed.

Gorman for years had worked on homicide cases from across the Atlantic Region.

They were the caseload of the Blood Spatter Section.

Lathem was the Officer in Charge of the 'H' Division Major Crime Unit.

he was in charge of every major crime investigation

that occurred in the RCMP's jurisdiction for the Province of Nova Scotia.