The purpose of these burn tests was to attempt,

as nearly as possible,

to replicate some of the events that occurred in the burnt area of the aircraft.

However, all of the equipment in the aircraft could never be accurately placed in such a mock-up.

It was also realized that the amount of flammable material directly associated with the wiring system was minimal,

so that material was not represented.

The Metalized Mylar was the main fuel source.

When Dr. Lyon viewed the frame area and duct  placement,

he estimated the amount present to be about 1000 grams or 2.2 pounds.

Given the limited resources available and the desire of the TSB to observe the fire in real time,

there could be no frame enclosure that would restrict oxygen levels

or replicate the minus 60-degree skin temperature caused by high altitude.

However, as nearly as possible, the placement of the main ducts

and their distances in relation to the ceiling were accurately reproduced.

However the accuracy of the type of material used for each burn test was questionable. 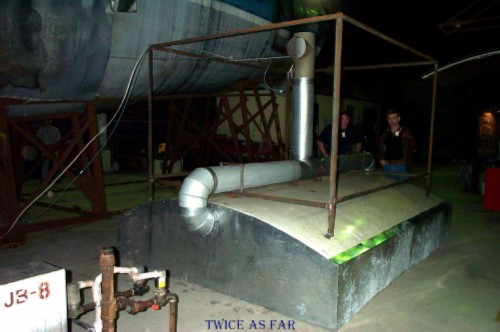 This photo showing the test fuselage was taken on first arriving at the burn centre.  The curved ceiling area was a portion of a 747 hull, and the sides were made of tin sheeting.  The frame on top supports the smoke chimney.  As can be seen, the smoke is intended to exit either end and go out the central stack were sensors monitor its contents.  It was immediately realized that the unit had to be raised off the floor for ease of loading the interior with insulation and duct material.  Viewing ports with fire proof glass for cameras had been made, so raising it would offer more suitable monitoring.  There is a metal floor in the unit to represent the aircraft's ceiling. 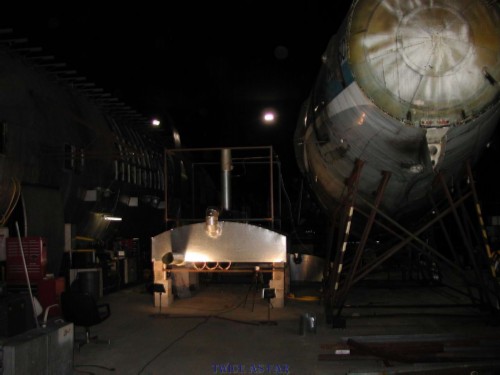 This photo gives an idea of the size of this building. The frame was positioned between the hulls of two large multi-passenger aircraft.  In this photo the test frame has been raised to its working position on concrete cinder blocks. 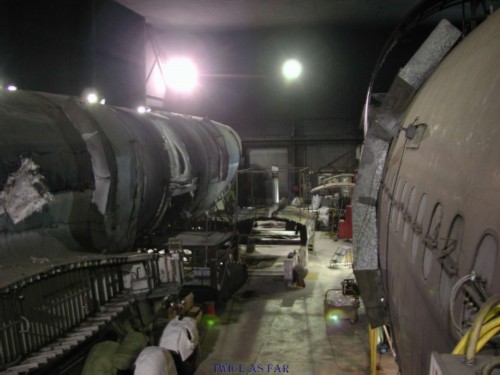 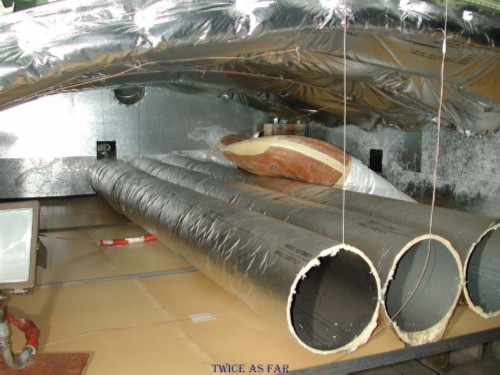 The first test was conducted with the material shown in this photo.  The three ducts are wrapped and positioned to represent the three main ducts in the aircraft.  The brown coloured fourth duct to the fifth zone is also present in its normal position.  The ceiling has insulation blankets consisting of insulation in a Metalized Mylar envelope that is between the longerons or frame stringers, and everything is then covered with larger blankets of Metalized Mylar encasing fibreglass insulation, thus creating the two layers of insulation with actually four layers of Metalized Mylar.  The smoke outlet is at the upper edge of the far wall left of centre.  Two viewing ports can be seen with a camera visible through the port at the far end of the left duct.  To represent the galley area ceiling tiles, the floor of the unit consists of three sheets of tin supported in place by angle iron stringers.  The ducts are suspended above the ceiling surface as they would be in the aircraft. 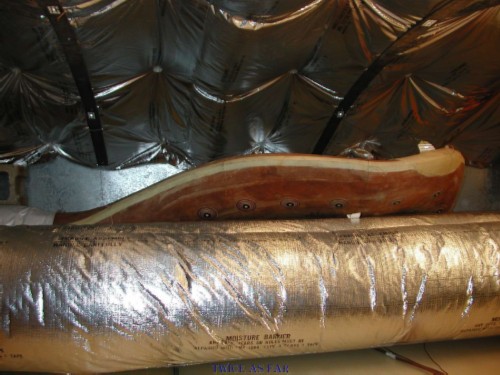 This side view shows the fourth duct, the wrapped main ducts, and the ceiling covering of flammable insulation blankets.  Metalized Mylar has a shiny silver reflective finish, while the Metalized Tedlar on the end of the fourth duct has a dull and more greyish finish. 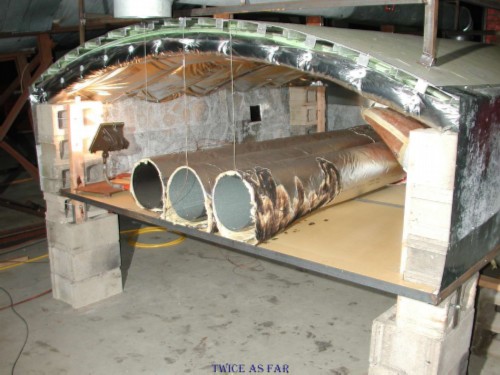 The unit was set alight several times by igniting the bottom of the central ducts, but in less than a minute or so it was realized that this material would not burn.  The overhead blankets were Metalized Mylar blankets from the aircraft refits so they would normally burn, but the ducts had been mistakenly wrapped in a Mylar called Orco Film AN-34.  This test certainly showed that the material would not sustain a flame front under normal conditions.  This material was the same that the Boeing representative advised was wrapping the outside of the Queen Mary Ducts during the Zurich 3 blanket removal trip.  By all indications, this material was wrapping the Queen Mary Ducts on Vaud.  So it can reasonably be assumed that duct material did not contribute to the fire load unless an accelerant was used to provide a sufficiently hot flame. 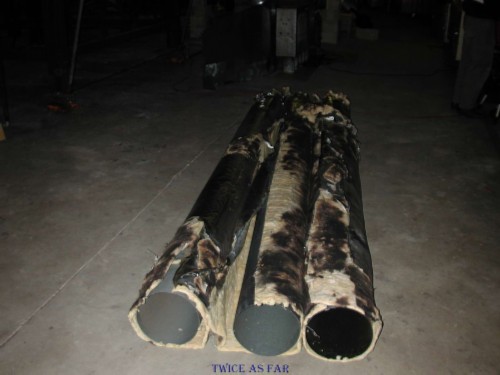 Once the fire was out, what there was of it, the main ducts were removed to show the remaining Mylar material, which was most of it.  Where it did burn, it did little if any damage to the fibreglass insulation.  It never affected the fourth duct at all or any of the overhead Metalized Mylar. 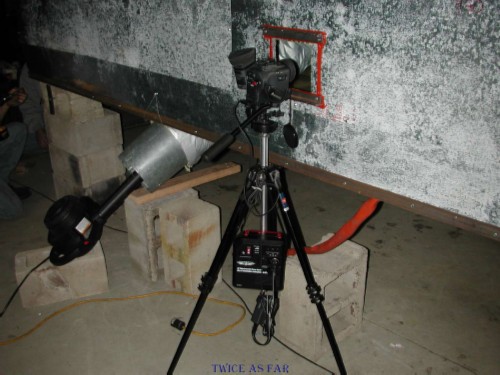 Each side of the frame had a viewing port with a tempered fireproof glass covering.  Most of the time it worked well, that is until the frame itself filled with smoke so that nothing could be seen.  The unit to the left of the tripod and camera is a blower fitted to a metal duct that then connects to the fourth duct.  The idea was to force a moderate amount of air through the fourth duct while it was being heated, as would have been the case on the aircraft.

This test showed that the Orco Film AN-34 material

that had been inadvertently used to wrap the mock ducts

does not burn in a fire that has a normal temperature flame.

Orco Film AN-34 looks similar to the Metalized Mylar that Garstang had wanted to use for this test.

It was an honest mistake that was remedied on the next trip to the FAA burn centre.

However, it raised a couple of points.

The fact that AN-34 does not support a fire under normal conditions was the first.

The second was how much AN-34 was actually in the examined aircraft that we mistook for the flammable type.

John Garstang felt that we had seen none during the trips to Zurich.

AN-34 was found during my resort of the insulation blanket materials that was conducted in J hangar,

and according to the Boeing people present for the Zurich-3 blanket collection,

the plane in Zurich that John did not see had AN-34 on the Queen Mary Ducts as an outer wrap.

That plane was of a similar age as HB-IWF.

AN-34 was present on Vaud, and it seems the fire was hot enough to cause it to burn.

Also note that two other types of similar material were dealt with.

Notes were made of the burn test, and the following is taken from those notes.

At about 1330, with cameras rolling, the three flashes were fired about five seconds apart.

This enabled the timers to be started.

Then Don struck a heat sensor with the flaming lighter.

This sensor was given to him specifically for the purpose so the computer can register a heat spike.

Then, he set alight the duct wrap through the lighting hole.

Three attempts were made at this point, each time with the fire going out after a very short time.

He then went to the forward end to try it several times.

Then he went to the aft end.

As he started the aft burn, I fired the flash once again to sequence the videos even though they had continued to run throughout.

Again, the Metalized Mylar failed to burn beyond a few minutes.

The tapes and cameras were then shut down.

The three ducts were then loosened as they had been wired tightly together as they would have been in an aircraft.

At about 1435, there was a restart of the cameras with the same start sequence of three flashes.

Numerous attempts were made at several locations, but by 1459 hrs, they had all failed and the test was shut down.

Basically, the duct wrap failed to burn with a sufficient amount of heat to cause it to continue to burn either horizontally,

and in some cases, very poorly in a vertical upward manner.

It certainly never came even close to warming the foam duct, and there was absolutely no danger of causing the ceiling to catch fire.