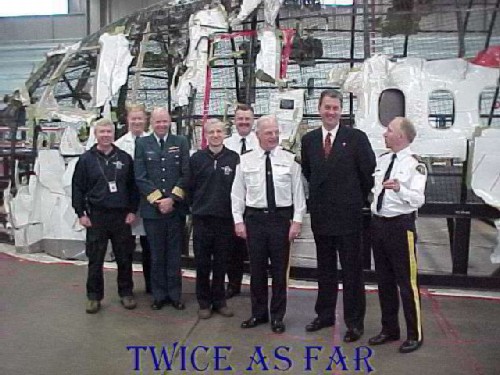 RCMP Commissioner Murray's second trip to Shearwater to view the debris occurred on the 13th of May, 1999.  During this trip, his shadow was able to rest as Murray didn't rush through the hangar as he had done in September of 1998, much to the embarrassment of those RCMP members who caught only a fleeting glimpse of his shadow running to keep up with him.  The Commanding Officer of 'H' Div., Assistant Commissioner Dwight Bishop is on the right end with Andy Lathem in his standard 'Men in Black' business suit beside him.  On Lathem's right is Commissioner Murray.  Andy's dark glasses and his 'wand thing-a-ma-jiggy' are likely back in his office.  Vic Gerden, Lead Investigator for the TSB, is at the Commissioner's right shoulder in the blue TSB pullover shirt.  Larry Vance is on the extreme left with Chris Harmes on his left shoulder at the back.  Of course, this photo opportunity was carried out in front of the reconstruction jig in the hangar at the Shearwater base.   Dr. Brown's initial AES findings are still four months away, and there is no indication yet of anything amiss with the file other than the extreme amount of burning and extensive molten aluminium.