After the first AES testing session in September of 1999

and the discovery of the potential criminal aspect of the file,

the TSB members gave every indication

that they intended to shut down the AES testing process.

In an attempt to defeat that prospect,

Lathem and Gorman were encouraged to meet with Gerden about the testing.

Instead, Lathem passed it back to me.

I, along with Vic Gorman, met with Vic Gerden to discuss AES. 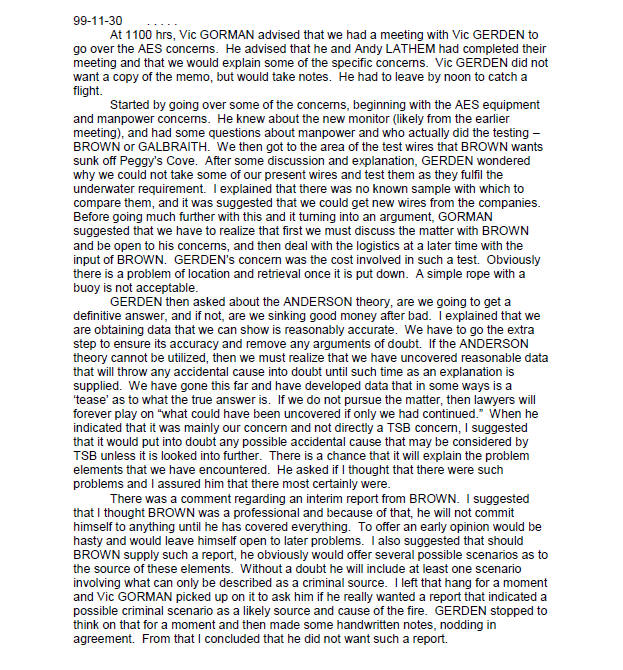 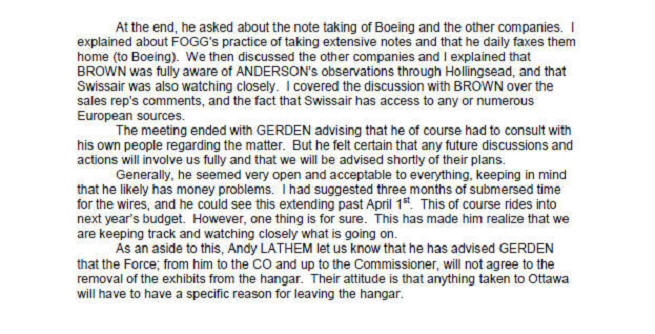 While it's not recorded here,

several times during this meeting the discussions became quite intense.

Gerden tended to lean towards shutting down the AES testing.

I told him that he could not do that.

Once a scientific process was started,

it had to be finished no matter where it led.

The evidence trail must be followed.

It was made clear to him that if they decided to shut down the testing,

the RCMP would take it over and it would be ours to control to the end of the evidence trail.

Several times Gorman had to calm the waters,

simply were not suitable as test exhibits.

Gerden's manner was to never make a decision until the last possible moment.

Add to that was the fact that as a non-criminal investigative group,

they were in charge of the investigation.

Because I was conducting a criminal investigation, even if only on my own,

his complacent and superior attitude was in effect an  interference in my investigation.

Gerden, if I had received the backing of my supervisors,

would have been charged for obstruction of justice

by his wavering over whether or not the testing should continue.

However, I also knew that there was no appetite within the RCMP's management

to take over this testing, or any other part of the file.

Lathem and Gorman had made that clear

There was no money for the extensive amount of work required to investigate the matter criminally.