Part of the investigation included

understanding the airflow patterns in the Swissair configured MD-11 aircraft

Knowing those patterns could help locate the source of the fire.

Boeing's  experience in these matters revealed that

airflows in the aircraft while at ground level

differed to those while at high altitude.

One reason for this was that

with the aircraft flying at over thirty thousand feet,

the skin of the aircraft cooled down to minus 60 degrees F.

Plus the plane travelled at a speed of 0.8 mach or about 700 miles per hour,

so any heat on the inside surface of the skin

would quickly dissipate and be lost to the huge heat sink that the aircraft skin had become.

To determine these patterns

to record those internal air flow patterns while at altitude.

As mentioned in the book,

there was considerable opposition to having a police investigator on board the flight.

That opposition not only came from Boeing and the TSB

but from RCMP file supervisors.

This photo shows some of the video recording gear that was used on the test flight.  VHS was the standard for the time as digital recording was still in its infancy.

Some of the smoke generating and accumulation gear that were used on board the test flight.

One of the scanners that were used to determine the level of smoke, in this case, in the cockpit area.  Several were used, and each had been properly calibrated before the flight.

Once the flight was over and back on the ground, there was time for a group photo of those who had worked the test flight, except of course for the second Boeing photographer who took this photo.  Four TSB members are present along with me, and the rest are all Boeing personnel.  John Garstang is at the photo's left rear with Mark Clitsom beside him and then Vic Gerden as the third from the left of those standing.  Larry Fogg is in the blue, white and red jacket and kneeling on the right of the foreground row.  Jim Foot is standing at rear centre, fifth from the right of those standing just behind the salmon coloured shirt.  I am at the extreme rear of the group, left of centre and behind Gerden's left shoulder, a head above everyone else.

The tests were completed first with the smoke curtain sealed

and then with the curtain opened.

that took place in the Transportation Safety Board Lab in Ottawa.

being dropped on ceiling tile and flooring carpet from the debris wreckage.

could have floated there in salt water.

There was no indication that explosives had been involved in the downing of the aircraft,

but to cover all the bases, it was agreed that the test should be conducted in actual salt water.

Remember that things may float in salt water

yet sink in fresh water due to the difference in buoyancy between the two.

So the test was conducted at Lawrencetown beach, Nova Scotia.

It was found that the blue and white plastic exhibit did float,

but the others did not.

Because they were all found together,

it is reasonable to assume that since three of the four exhibits did not float to the location where they had been found,

then neither did the fourth.

No other similar exhibits were found anywhere else during the beach search.

While the explosive wire issue was merely a side show and not related in any way to the onboard fire,

the matter serves to show how the TSB handled potential criminal matters.

If they reacted in this manner over something totally unrelated to the investigation of the fire cause,

that linked an incendiary device to the cause of the fire.

During the Auger Electron Spectroscopy (AES) testing of the debris short circuited wires,

according to a prearranged plan

and submerged in seawater for thirty days.

These photos show those wires upon retrieval after thirty days of exposure to seawater. 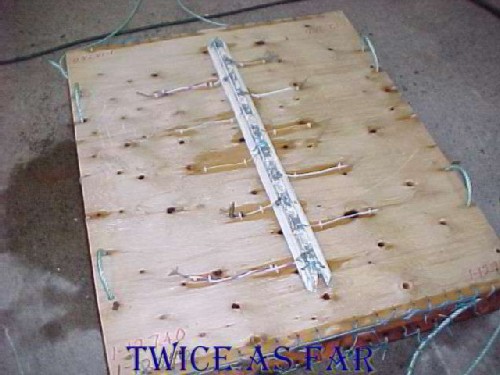 Exhibit #1-12740 is the pallet containing the aluminium frame piece with the attached wires.

It was retrieved after thirty days of seawater submersion, as were the other two pallets.

The pallets had not drifted, and everything on them was intact upon retrieval.

The only thing changed was that the ballast weights were cut out when lifted to the side of the boat.

This allowed for a lighter pallet when it came time to lift them up onto the wharf.

Exhibit #1-12741 was the pallet with the aluminium frame piece and the magnesium rudder pedal.

Again everything was intact, and the wires were still in contact with the magnesium pedal. 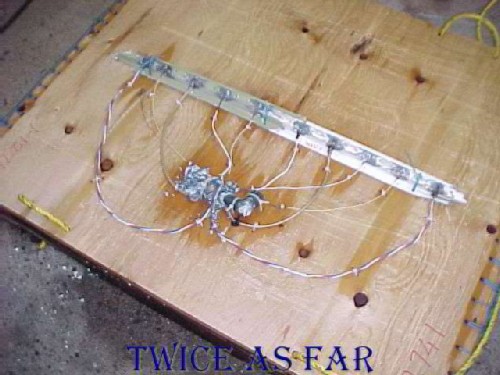 The rudder pedal had deteriorated only slightly

during its thirty day submersion. 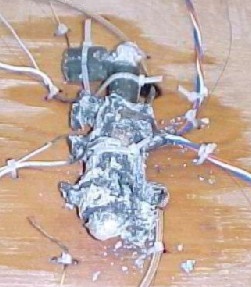 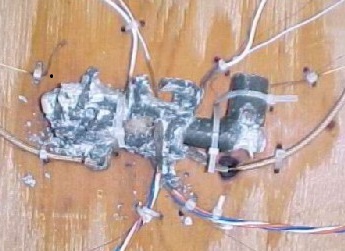 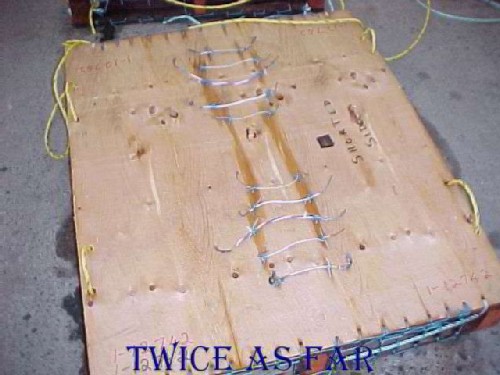 Pallet exhibit #1-12743 held the ten wires without any other metal strips.